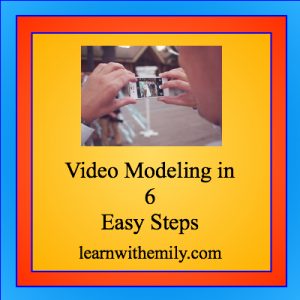 Why is Video Modeling Effective?

The 5 Steps for Creating a Video Model

The target behavior should be one that can be observed and sequenced. Video modeling is very appropriate for demonstrating how to do a new skill or to complete a new activity. Social skill, classroom routines, and conversation skills are all appropriate choices. I have personally created video models for what to do in a fire drill, how to take the attendance to the office, and how to wash your hands. Brushing teeth or other grooming activities would also be appropriate.

Step 2: Conduct a task analysis of the target behavior

Evaluate the steps required for completing the target behavior. Consider the following questions in your analysis:

Format your video based on the answers to the previous questions. Avoid including non-examples or inaccurate examples in your video.

For example, I realized that in a fire drill, a very loud sound goes off that may upset children with autism. It is also a change in routine, which also could result in difficulty. Previously, it was the routine of the special education teachers to take the children with autism outside before the fire alarm was set. My concern was that in a real life emergency, the children would not know what to do. A drill is designed to prepare for such an emergency. I felt like a video model would help the children know what to do in the drill, and thus know what to do when the alarm went off in a real emergency. The task analysis resulted in 5 steps including: ) lining up, 2) walking outside, 3) waiting, 4) walking back inside, and then 5) checking your schedule.

First, determine if there is a need for a visual support. Visual strategies are helpful since many children with autism have difficulty processing auditory input (Hodgdon, 1995). Visual supports can include:

Although visual supports are not required in video modeling, I have found them to be very helpful. Once the child has viewed the video of what to do, the visual support serves as a reminder of each step and the sequence in which the steps occur.

Anyone who can accurately model the target behavior can serve as the actor. In the video models I have created, I have always used adults. Children may also serve as actors. I selected adults due to the fact that they were readily available and could provide their own consent to be in the video. For the fire drill video, I taped my instructional assistants following the activity schedule.

The actors should be briefed on the purpose of the video and how to emphasize specific points. For example, I filmed a close up on the activity schedule before the step was demonstrated.

Recording the video should only take a few minus after the actors have been prepared. Sometimes retakes are needed to cover unexpected interruptions or after further clarifying what you want the actors to do. I prefer to record using an iPad or iPhone due to ease of use.

Step 6: Show the Child the Video

The final step is to show the video to your child or students. You may want to let the child watch the video multiple times before asking them to demonstrate the skill. If you have recorded your video using an iPad or iPhone, you can also show the child the video using the same device. If you would like the video on a larger screen, it can be streamed from your apple device to an apple TV.

In my classroom, I should my students the fire drill video a few times at the beginning of the school year. On the day of the first fire drill, I had my students watch the video once again. Later in the day when the fire alarm went off, they all knew what to do and followed the activity schedule for what to do in a fire drill.

Video modeling is an effective way to teach a new skill to individuals with autism. The skill selected should be task analyzed and broken down into sequenced steps. Consider using additional visual supports in your video model. Find and brief your actors and then record your video. Show the child the video prior to having them demonstrate the skill. Show the video again as needed. Apple, A. L., Billingsley, F., & Schwartz, I. S. (2005). Effects of video modeling alone and with self-management on compliment-giving behaviors of children with high-functioning ASD. Journal of Positive Behavior Interventions, 7(1), 33-46.

Sturmey, P. (2003). Video technology and persons with Autism and other developmental disabilities: An emerging technology for PBS. Journal of Positive Behavioral Interventions, 5(1), 3-4.