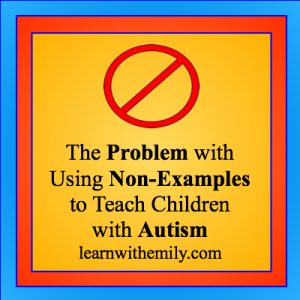 In teaching, a non-example is when you demonstrate or show what not to do. While exclusively teaching children with autism in the public school setting, I learned about the problems that go with non-examples the hard way. I consider these experiences to be instructional mistakes. I am sharing them here in hopes that you too will see the problems with non-examples and avoid using them in your teaching.

*Disclaimer: In many teaching situations and populations, non-examples are helpful. Showing a child what not to do in a situation may actually help them avoid errors. If you are teaching children with autism, you will have to determine whether or not to include non-examples on a case by case basis. Some children might benefit, but many others will not.

Real-life situations where a non-example resulted in a problem:

I had a student who liked to climb on top of furniture. I think part of the pull was his attraction to Super Mario games. He loved to watch his brothers play and he acted out Mario in the classroom. Mario is always bouncing on bad guys, climbing, and jumping off objects. Since so many of my other video models were effective, I decided to make a video model to teach him not to climb on furniture. My video was full of non-examples. I had an actor climb on various places this student had climbed in the classroom. At each spot, I had another actor redirect this person off of the furniture. A cue card was presented that had a picture of climbing crossed out. The actor held up the cue card and said, “No Climbing.” At the end of the video, the question was asked, “Where can I climb?” The actor then went outside and climbed on the equipment in the playground.

Next, I placed the “no climbing” cue cards on the furniture in my classroom. I showed my students the video.

Great idea? Nope. Not only did it not help, I inadvertently taught more of my students to climb on furniture.

Teaching Fail! I threw that video out. Luckily the students who were copying the video stopped climbing after a few days.

I had a student who would hit and kick. I created a simple social story in hopes that it would help the student understand what to do. The visual was full of crossed out non-examples. For example, one sentence said something like this, “When you are mad, no kicking, ask for help.” The pictorial representation of “no kicking” was a picture of kicking crossed out. When I showed my student the social story, he loved it. He read through it and did everything the pictures showed. When he got to “no kicking” he read, “no kicking” as he proceeded to kick.

Another Teaching Fail! I threw that social story out as well.

One of my children became interested in learning to play the piano. He loved video instruction. I came across a program called Kinderbach. Most of it was perfect for what he needed at the time. In one of the later videos, they included a non-example. They showed what not to do. When my son went to practice that part, he copied the non-example every single time. He thought that was what he was supposed to do.

Teaching Fail!  I still like this curriculum and plan on keeping it. I can just skip ahead when my other children get to the one non-example part of the series.

A social skills curriculum written for children on the spectrum is called “Autism & PDD Picture Stories and Language Activities.” It is published by Linguasystems (not an affiliate link). When I taught school, the speech therapist had used the series in my classroom. The stories are simple but engaging. There are a variety of options available for different age groups. The main characters are Matt and Molly. I went through the “Social Skills with Friends” book with my children. In this book, each story covers a specific problem, like “how to greet someone” or “how to play a video game with someone.” The first picture of the story introduced the problem. The next two pictures show a wrong way to deal with the issue and emphasize, “Oh no, that’s wrong!” The last picture shows the right way to deal with the situation. Once again the dreaded non-example comes to play. The non-example in the story about how to play a video game with a friend has become a problem in my house. In one of the non-examples, Mat stands in front of the TV while his friend is trying to play the game. As a result the friend is not able to play. This small non-example taught two of my children to stand up in front of the TV and block the view of others who are using it.

Teaching Fail! I’m not going to throw this one out, but I am definitely going to be more cautious about the non-example components of this curriculum.

In summary, non-examples may be used in teaching children to show them what not to do. The intent is to highlight potential mistakes in hopes that the student will then be able to avoid the demonstrated mistake. Caution should be used when using non-examples to teach individuals with autism. I recommend avoiding non-examples as you may inadvertently teach a child to do something you do not want to them to do.